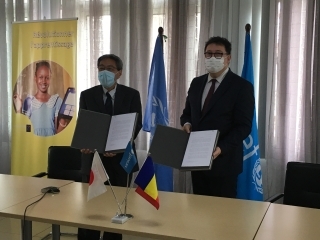 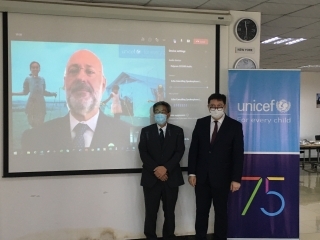 On December 1, a signing ceremony of the Exchange of Notes took place between Mr. IKEDA Kiyohiko, Chargé d'affaires of the Embassy of Japan and Mr. Jacques BOYER, UNICEF Representative in Chad in the presence of the UNICEF Representative in Central Africa, Mr. Fran EQUIZA by video conference. These are the "Project for the Development of Cold Chain for Immunization" in Chad (about 150 million Japanese yen or 750 million CFA francs) and the "Project for Strengthening Access to Immunization" in the Central African Republic (about 150 million Japanese yen or 750 million CFA francs). This cooperation aims to contribute to the promotion of universal health coverage in Chad and the Central African Republic by improving access to immunization for children through UNICEF.
Click here for the press release :
- Chad
- The Central African Republic